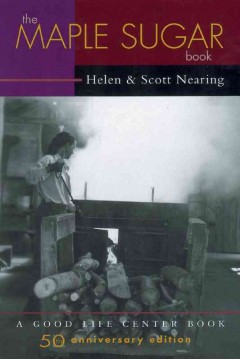 A half-century ago, the world was trying to heal the wounds of global war. People were rushing to make up for lost time, grasping for material wealth. This was the era of "total electric living," a phrase beamed into living rooms by General Electric spokesman Ronald Reagan. Environmental awareness was barely a gleam in the eye of even Rachel Carson.

And yet, Helen and Scott Nearing were on a totally different path, having left the city for the country, eschewing materialistic society in a quest for the self-sufficiency they deemed "the Good Life." Chelsea Green is pleased to honor their example by publishing a new edition of The Maple Sugar Book, complete with a new section of never-before-published photos of the Nearings working on the sugaring operation, and an essay by Greg Joly relating the story behind the book and placing the Nearings' work in the context of their neighborhood and today's maple industry.

Maple sugaring was an important source of cash for the Nearings, as it continues to be for many New England farmers today. This book is filled with a history of sugaring from Native American to modern times, with practical tips on how to sap trees, process sap, and market syrup. In an age of microchips and software that are obsolete before you can install them, maple sugaring is a process that's stood the test of time. Fifty years after its original publication in 1950,The Maple Sugar Book is as relevant as ever to the homestead or small-scale commercial practitioner.